Review: A Will of his Own – Kelly Harland

The biography of the first 9 years of Will’s life as told by his mother Kelly.

Instead of being an ‘in order’ biography like a lot of others I have read (generally going from birth – something’s wrong – diagnosis – what we did – cure or acceptance depending on the book) this is a collection of vignettes in a book. This does make it a bit difficult to follow at times, especially when you start jumping forwards and backwards in age, but it’s something different at least.

The first thing I noticed about the book was that the writing is a bit…well I can’t think of the right word so I’ll show you an example:

I actually started to relax, like someone whose sailboat is floating peacefully after being buffeted around by a storm. But something eventually comes up again, out of the blue, in a flash, an electrifying bolt.

I found this highly descriptive and poetic style of writing quite difficult to follow, especially where there were large sections of this type of writing where I’d start to lose track of the actual events that Harland was writing about. Still, each writer has their different style and what doesn’t work for me might well suit another reader just fine.

There are some interesting vignette’s in this book – such as Will’s reactions to noticing the dividers you use on supermarket conveyor belts, and his special interests which at various points included hand-dryers, escalators and boats. The parts that are about Will and his world, and what he likes and how he talks about the world around him are interesting to read.

Another thing I like about this book is the fact there isn’t much talk about ‘curing’ Will, and there aren’t many mentions of therapies that might try to ‘cure’ him. Harland may not understand her son’s sensory processing difficulties or his special interests, but she acknowledges them and works with Will rather than trying to force him to be more neurotypical. Will is presented as a whole and interesting person, which is a contrast to so many biographies of autistic children that are written from the point of view of “fighting through autism to get to the child inside”.

My problem with the book – and it is a problem that pops its head up rather frequently -+ is the fact that whilst Harland doesn’t talk about curing autism or such like, there is quite a lot of talk about the burden that autism places on her life. There’s a chapter about friendship, where she talks about her desperation and efforts to build friendships for Will. There’s little mention of whether Will wants these friendships, whether he is even happier when she does things like organises play-dates. What is mentioned instead is how Harland herself felt as a child, moving from place to place and how she finally felt when she made friends. It seemed like the whole friendship business was much more important to her than it was to Will. To be fair, Harland does briefly acknowledge that all of this friendship stuff is her wanting it and not so much Will. But she goes on to say that she’s going to carry on doing it anyway.

There are two sections in this book that especially highlight some of the less pleasant parts of reading the book, the first comes when Harland is telling Will about his autism:

The emphasis is mine. This part just bothered me in a way I can’t explain, but just the idea of telling your child that because he is autistic he has horrible parts that need to be gotten rid of doesn’t sit right with me.

The other section is about school photos. Harland writes a whole vignette about how Will getting a good school photo done is the greatest thing ever, really goes for it with the descriptive language. She describes the hardship of trying to get his first proper photo done and how wonderful it is (for her) that she finally has a good school photo of Will to place on her bedside table. When I first read this vignette, I mistakenly assumed that Will was about 7 or 8 (partially due to the way the vignette’s jump around Will’s life) and I had a moment of “Huh, I suppose I can kind of understand the excitement of that”, and then I read the line:

Now years have gone by and I still stare with pride and relief and wonder at Will, age three and shining, in his first school picture, standing in a frame at his parents’ bedside.

I then did a double take and went back to re-read the beginning of the vignette where I realised that the horrendous ‘proper photo’ effort that she described was in pre-school and in fact the only other photo that had been attempted in the school. I honestly thought she meant that Will had refused to have a photo taken for years up until he was 7 or 8, not that at the age of 2 he had refused to have a photo taken and then a year later sat for his school photo.

That is the jarring part of the book – the woe is me stuff. I obviously don’t know what it’s like to have an autistic child but there are sections of this book that are just painfully wallowing in self-pity and the chapter on the school photographs is the perfect example. 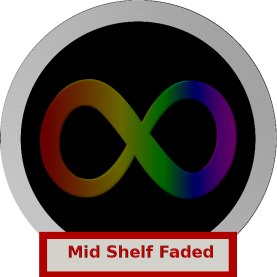 There are definitely some parts of this book that I found unpleasant to read and I was wavering between Shelving this on the Middle or Bottom shelf. When I compared it in my mind to other ‘parent biographies’ I had read, I decided there are parts of this book that make it a worthwhile read. There is a chapter entitled Desiree where Harland discusses the problem and resolution of her son’s upset over a changing billboard, which I especially enjoyed reading. It’s a half good/half not so good but not terrible book is what I’m trying to say I suppose. I eventually Shelved it the Faded Rating on the Middle Shelf.