Review – And Straight on Till Morning: Essays on Autism Acceptance

And Straight on Till Morning: Essays on Autism Acceptance 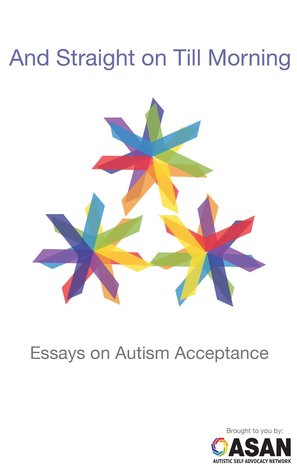 A collection of writings by autistic people and allies in the autism acceptance movement, many of which look at comparing awareness and acceptance. I think these essays were originally submitted to the Autistic Self Advocacy Network (ASAN) website, which I will link at the end of the review.

But a new day is dawning. Some of us have survived to adulthood, and more and more, we’re making our voices heard.

That section in the introduction made me wonder if I’d been too optimistic about the book, and I worried that the whole book was going to be filled with scare mongering hyperbolic. Some of us don’t survive to adulthood, most of us do. In fact, that’s where loads of problems come from because there simply aren’t the services available to provide for autistic adults. Those creating these support systems and providing resources sometimes seems to forget that autistic children grow into autistic adults. Personally, I don’t think we should be using the same scare-mongering tactics that have been used by Autism Speaks to get our point across, even if it is the complete opposite point.

Anyway, that aside, the first essay is about one autistic person’s description of what autism means to them. This was an incredibly interesting essay, even the writing style contributed to understanding how this person experiences autism:

A lot of people see this way of relating to the world as that old cliche of compensation. Where people think blind people’s hearing must grow more acute. I see it differently. It’s a way of experiencing things that could only have developed if more typical ways were absent. There are a lot of plants that cannot grow in the shade of a forest. But if there are no big shade-producing trees, they flourish. It’s like that. Many of my experiences and abilities stem from what happens when plants can flourish outside the shade of a forest.

The second essay is written by an ally, and is a brief discussion on how opening herself up to listening to autistic self-advocates helped to change and improve her perception of autism. It’s a short and to the point read. The third essay discusses the murder of George Hodgins by his mother and the way that his mother was portrayed in the media following this murder. That is to say she received a lot more sympathy for her actions than other kinds of child murderers do, just because her son was autistic. This is discussed in the essay, which, again, is an interesting read.

Following this is an essay on the vigils for George Hodgins and is sort of a rambling collection of thoughts, I was fairly neutral to that essay and after re-reading it I still am. There is then a huge essay which recounts the trial of the Judge Rotenberg Center (JRC) in the case of McCollins guardian v. Von Heyn et al. Andre McCollins was in residence at the JRC when one day the staff response to his non-compliance in removing his coat escalated to him being restrained on a restraint board, wearing a helmet, and being shocked thirty one times. This essay recounts each day of the trial (bar I think two days where the author was unable to attend), and is an incredibly worthwhile read. What I found myself thinking while reading this essay was that when people who are supposed to be working with autistic people are given too much power, it so easily slips from teaching to abuse. I wouldn’t dream of using any kind of shock device (not, as far as I know, that they are used in the UK in any capacity with autistic people) because someone didn’t remove their coat. Another thing Andre was shocked for was for “full body tense ups” because they were a health risk because they raised his blood pressure. I would have thought being shocked would have done a good job of raising someone’s blood pressure as well.

The redirect also allowed for a brief exploration of Andre’s behavioral plan in JRC in general, which included the other behaviors for which he could be shocked. In addition to aggressive behaviors, the GED could be used in response to “major disruptive behaviors” such as yelling, screaming and swearing; “noncompliant behaviors” such as one referred to as “blatant no”; and behaviors defined as inappropriate such as hand clapping, talking out of turn, nagging and talking to himself.

I could not believe that people thought it was okay to shock anyone for those behaviors. I could, at a push, understand it if someone was in immediate danger of being seriously injured, and if other alternative methods to prevent the impending injury had failed, but to shock someone for talking to themselves? This essay is definitely a highlight of this book.

Following that is a poem about the idea of churches designating one Sunday in April as Autism Sunday. It’s okay. The next is an essay on the differences between awareness and acceptance. Again this is an okay essay, saying how awareness is a start but acceptance must be our target because almost everyone is aware of autism now, and awareness alone is not enough. The problem I have with this essay is the tired old cliche that it drags out:

Awareness says the tragedy is that I exist as I am. Acceptance says that the tragedy would be trying to make me any other way. In this way, it makes complete sense that people who have awareness as their main goal would say that I “have autism”, whereas those who would agree that I “am autistic” are those who work for or are achieving acceptance.

I do not agree with this sentiment at all. I have rambled on about this before, how someone could say “person with autism” with the utmost acceptance and respect, and someone else could say “autistic person” and sneer it out with as much contempt as they could muster. I use both terms, and I think to dismiss what people are saying (and this happens a lot online) just because they use person first instead of identity first is narrow-minded, especially since there are autistic people who prefer person first or who, like me, have no preference. Now if you were to say to someone “actually I prefer identity first language” and they went “oh no, I’m going to still call you this”, that’s different. They’re disrespecting your choice of words after you communicated it. If, however, you dismiss what they’re saying because they say “person with autism” without knowing your preference, that is what I am talking about. I also don’t agree with the whole argument of “well the autistic community as a whole prefers…”, because no-one can speak for any other autistic person’s way of identifying, only for their own. If you want to correct someone then do so, explain why if you want, but don’t dismiss a good idea just because of this particular case of semantics.

After that follows another essay written in that popular “open letter” style, and I much prefer this author’s approach to how acceptance is a better thing than awareness and why it is. I think after the JRC essay, this one was my next favourite. Then there is an essay on awareness written by the mother of an autistic teenager, and it’s an inoffensive, middle of the pack essay.

The final section kicks off with a bit of a confusing essay, I think it’s a mother recounting her child playing with his Lego toys but it’s not as good as some of the other essays. Then an essay on how one autistic person celebrated autistic acceptance month by giving their debut speech in Toastmasters – this is another good one. The penultimate essay is a professional’s view on moving towards acceptance and then we finish with the essay that the book is named for, which is another interesting view on our movement towards acceptance.

Is it worth reading?

Yes, even if only for the JRC essay, but there are a lot of good pieces of writing in this book.