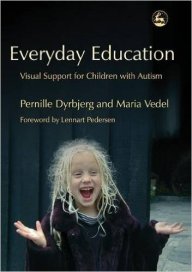 Written as a collaboration between two professionals within the field of autism, one of whom also has an autistic child whose own use of visual supports serve as examples throughout, this is a book that details and gives examples of different kinds of visual supports that can be used to help an autistic child. The methods suggested in this book are far from exclusive to children and could be implemented for use for people of all ages.

After a brief introduction on what autism is, what visual supports are, and why people should use video supports with autistic people, the book leads straight into the first section which is Physical Arrangements. I appreciated the fact that this was the first main section, because often people can get fixed on the idea that visual schedules are the main component of visual supports when they’re not – like every other component they’re part of a larger scheme. This section discusses how to define areas in the house to make it clear they are for defined activities, and doing things like putting all a child’s toys or books or cds away into (unlocked) cupboards but with symbols or photos on the doors. Too much clutter and visual information can be overwhelming for autistic people, and reducing this to a simple symbol or photo on a door can help.

The next section is Daily Schedules, which is probably what most people think of when they hear visual supports. This section goes through a wide range of examples starting with objects of reference and moving through photo and symbol time tables. It gives examples of different ways that object of reference time tables can be set up – such as using a hanging shoe rack with a finished basket at the bottom. The photo and symbol time tables are also represented in a variety of ways including how to alter a yearly calendar to make it more manageable. The next section, Preparing for Special Occasions, takes the information from the Daily Schedule and shows how to combine it (somewhat) with social stories to help explain and prepare for special occasions. There is a reasonable amount of space dedicated to birthday parties – which might be fun for many but can be terrifying for some autistic children.

Support for Learning New Skills shows how elements of the TEACCH approach such as moving from left to right, order of display, and use of baskets and visuals together, can help to develop independence skills for children with examples across dressing, cooking, showering, and setting the table. These same elements are then referred to in Structured Activities which is a useful section for teachers and support staff as well as parents – showing different ways to adapt jigsaws, preschool activities and lego sets for children.

The final two sections go over how visual supports can be used for expressive communication: Visual Support for Communication, and Visual Support for Social Interaction. The communication part has a large focus on picture exchange (perhaps due to cost the authors did not have access to AAC devices, and nine years ago there were not phone and tablet apps available for them to test), but also shows different ways of adapting this such as selection systems on fridges and daily books that allow information sharing about what a child did at school that day. The Social Interaction section lacks the detailed explanations and examples that all the previous sections did, most of it consists of photographs of Dyrbjerg’s daughter engaged in various activities. It does outline how to write a social story which is something commonly used to support social behaviour.

The book finishes by going through the practicalities of making visual supports along with a list of paid-for resources which, from my experience, are good but expensive.

Is it worth reading?