Review: Wishing On the Midnight Star 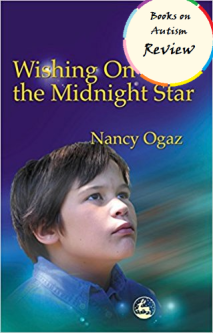 This is a fictional snapshot of family life from the perspective of a boy with an autistic brother, following his journey from frustration to acceptance in regards to his brother.

Siblings often get a bit of a rough deal in discussions around autism. They’re likely to be the longest running relationship an autistic person has, there’s a good chance that for autistic people who have considerable support needs that their siblings will just be expected to take up those needs when parents die, and there’s not an awful lot of support out there for them. There’s also the fact that some (maybe even many) are overshadowed by a sibling who needs more support than them and they are often spoken quite poorly of by some parts of the autistic community. So whilst Alex certainly does not start out this story as a particularly sympathetic brother to Nic, there’s still something quite real about the frustration he feels.

“You just squished it all up – look at that messy purple ooze. Besides, you’re supposed to eat your dinner first”, Nic bossed, “Mom, look what Alex did”. He pointed at the pie,

“Oh, don’t be dopey, you little doofus! It doesn’t matter.”

“Don’t call me dopey doofus, you moron! Mom, Alex is being rude.”

Mom started to say something, but I didn’t wait to hear it. She always defended Nic. I shoved back from the table, making a loud screech with my chair, and stomped off to my room. I kicked the door shut with a bang.

Of course, like any other young teenager, Alex has other things on his mind than just his brother. He has to contend with bullying, looking after the chickens (a tougher job than it sounds!), and his own feelings of inadequacy; not to mention navigating the difficult social situations with a girl that he likes. As he bounces from emotion to emotion, jealousy to anger to grief to loneliness, the portrayal of bumbling confused through the teenaged years works well.

The animosity between Alex and Nic escalates as Alex becomes increasingly resentful of his brother’s behaviour and the way his mum always takes Nic’s side in any sibling argument. Then they stand up to the local bully, Todd, who takes his revenge on them by killing their rooster, ‘the Beast’. As Nic and Alex seek to find evidence of Todd’s crime, they witness his miserable home life and the suffering he experiences. Then they bond over chickens.

“Making breakfast. The chick needs to eat”, he said.

“You’re going to feed an egg to a chick? That’s practically cannibalism”

Of course, every story has to have another dramatic moment before the end and on the evening of a Halloween party they’re both invited to everything goes wrong and Alex and Nic finally have the talk that they’ve been needing to have for the whole book before tragedy almost strikes one more time.

While the frustration and other emotions of Alex and Nic feel quite real, the scenarios they encounter and the way they work through them do at times come across as rushed or unrealistic. Especially in the second half of the book where event after event piles up one after the other. Overall though, it’s a pretty good book – especially because whilst Nic’s autism is part of the book it’s not the whole book, and even though Alex gets frustrated at his brother and Nic’s difficulties are discussed, so too are his strengths. Probably better for younger readers than adults and would fit quite well in a classroom.