The biography of Sam up until the age of about 4 by his mother Peggy.

I only read this book three days ago and I as I sat down to write this review I had difficulty remembering much of it. I had to speed read through the book again to refresh my memory. This isn’t so much a story of autism as a story of the mother of an autistic child, that is to say that Sam and his world are secondary to the author’s.

The book opens with a short chapter on Heinkel-Wolfe’s life growing up, which then morphs forward into her pregnancy where she nearly suffers a miscarriage partway into the pregnancy. During pregnancy Heinkel-Wolfe claims to have developed…I can’t find the right words for them so I’ll quote from the book instead:

During the pregnancy, I had been able to tell the precise time without looking at the clock. In addition to being sensitive to certain sounds, I also became such a picky eater that Mark had learned to wait until I got home from work before he made us dinner.

I know the picky eating thing sometimes shows up during pregnancy, and I’m not going to flat out say that I don’t believe that other two things developed but they are traits known to present in autism and it’s almost like they’re placed there as a means of “forewarning the birth of an autistic child”. Still, it’s odd but I’m not going to say it definitively didn’t happen.

So we move through Sam’s birth and the subsequent unsettled baby he is, seemingly frustrated and angry at the world. This book doesn’t really go up much past Sam’s toddler years (although he does write a chapter at the end) so pretty much everything we read is about how Heinkel-Wolfe feels about her son, her situation and the world around her. A happy picture is not painted, such as when on a meal out with friends a camera is produced:

‘Sure, let’s save for posterity my writhing, wriggling baby’, I thought. I knew from his cry that he was tired, too. I wanted to go home, put Sam in his crib, and walk away. He doesn’t like being held anyway.

There’s quite a bit written about filling in those “Baby’s First Year” logs, which is all going well to begin with as Sam hits all his milestones, but he is still an unhappy baby.

There’s the typical denial that anything might possibly be wrong:

Jan and Tracy delighted in recounting Sam’s adventures in their house. They thought Sam was really smart. Perhaps Sam’s only problem was that he was precocious: nine months going on nineteen, Mark and I told each other.

This sort of thing shows up a lot in biographies. You might even hear it a lot in day to day life. I watched a documentary called “Loving Lamposts”(I may even get around to reviewing that as well) which talked to all the different sides of people involved in the autism community. They interviewed some parents who believed vaccines caused their children’s autism. One mother, after vaccinating her first son and him being autistic said (and this is from memory so not 100% word for word), “I didn’t vaccinated my second son and he shows a lot of the same traits as (first son’s name), you know he does a lot of the same things and the same behaviours. But I wouldn’t say he was autistic, I’d say he was gifted”. Well, oddly enough, autism and intelligence are not incompatible things. It is entirely possible to be of above average, average, or below average intelligence and be autistic. This dichotomy that the child is one or the other is frustrating. If it’s not presented as a dichotomy then it’s put forward as this child is autistic but they’re smart so that balances it out. That is equally as frustrating – and is sort of putting forward the suggestion that “Well it’s okay that this child is autistic because he/she is intelligent”. Anyway, I digress.

Sam’s difficulties cause problems between the couple and we read more and more about how difficult Heinkel-Wolfe is finding life with Sam. She starts to question everything that she did or that happened during her pregnancy. They get a speech therapy intake appointment set up which starts up the various strategies put in place to help Sam. We go through his development of speech and various toys that are bought and played with.

The family don’t like many of the speech and language therapists or other professionals that come to assess Sam but I’ve discovered that’s pretty much par for the course when reading biographies so far. Teachers are painted as uncaring and barely competent when it comes to dealing with not just Sam but all the children under their care. Are so many teachers really this awful? Maybe they are, I don’t know. The school I work in has a bit of a mix – teachers who work hard to ensure that the needs of their SEN children are being met, and teachers who just let the 1:1 deal with it and have very little involvement. Maybe all these familes are just really unlucky with teachers.

The word autism isn’t mentioned until page 86 of the book, and of course Heinkel-Wolfe automatically thinks of the stereotype of autism (rocking in a corner, shouting unintelligibly) and dismisses it. It’s mentioned again when they move to a different school but again nothing much is done about it.

I’ll be honest, I could continue but I just didn’t find the book that interesting to read. They eventually accept that he has autism and work hard to “get Sam out of there”, because you know obviously his autism is trapping him. It’s towards the end of the book that Sam receives his autism diagnosis and then there’s a section about Sam running off and finding his way to the market by himself (hence the name of the book) and then there’s an epilogue and a chapter by Sam which is mostly a retelling of things he does and things he likes and then the book ends. 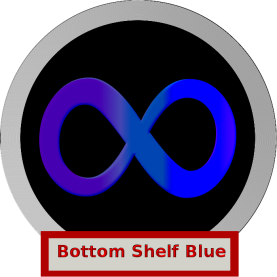 The book wasn’t outright bad, it does give an insight into the mental process a parent goes through, but it wasn’t a book about autism. It was a book about a mother struggling with the difficulties of her child since the book wraps up pretty quickly after Sam gets his diagnosis and we don’t read anything of the years between the diagnosis and now. I didn’t really get into the book in any kind of meaninful way so I’m going to shelve it on the Bottom Shelf in Blue.